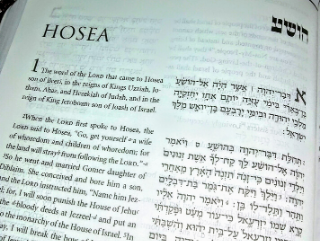 Return O Israel, to Adonai your God,
for you have stumbled in your iniquity.
3 Take words with you and return to Adonai.
Say to Him: “Take away all iniquity,
and accept what is good,
so we may repay with offerings of our lips:
4 ‘Assyria will not save us.
We will not ride on horses,
and we will never again say, “Our god,”
to the work of our hands,
for with You, orphans find mercy.'”

5 “I will heal their backsliding,
I will love them freely,
for My anger will turn away from him.
6 I will be like the dew for Israel.
He will blossom like a lily,
and thrust out his roots like Lebanon.
7 His tender shoots will spread out.
His beauty will be like an olive tree
and his fragrance will be like Lebanon.
8 Those dwelling in his shadow will return.
They will grow grain and bud like a vine.
His renown will be like the wine of Lebanon.

9 Ephraim: “What more are idols to me?
I have responded and observed Him.
I will be like a luxuriant cypress tree.
From me will be found Your fruit.”

10 Who is wise? Let him discern these things.
Who is intelligent? Let him know them.[c]
For the ways of Adonai are straight,
and then just walk in them,
but the wicked stumble in them. Hosea 14
This is Hosea signing off, shalom!

6 thoughts on “The Voice of Hosea”